David
I'm not sure what it is about some politicians, but they seem to think that good news is bad news... or perhaps it's that good news is good news for them as it allows them to generate controversy when it should be anything but.

I get 'top fan' badges awarded to me by dinosaur politicians (shadow minister of transport) when I've commented on the folly of their position against updating transport legislation to make it more responsive to communities. And now in Christchurch we have two more dinos wanting the release of a Draft Transport Plan for Christchurch in order to presumably 'out' the notion that we can make things better by considering actions to address population growth, and carbon emissions.

The other council members just shrugged and said - sure... no problem. And I can see why. Despite staff concerns that draft considerations will be presented as fact - Call to publicise 'radical initiatives' of draft transport plan branded an 'election stunt' - the document covers the relevant considerations pretty well... and none of the ideas in the document are formal proposals and none are endorsed by any councillors as it is a draft that is a working document open to change.

A review of the document - Draft Christchurch Transport Plan 2022 (PDF) - shows that there is little that is really controversial. It is sensible to consider the number of parking spaces in the CBD and understand the implications of pricing them. So too should the plan consider if congestion pricing is a useful tool now that the Central Government is passing legislation to allow it to be implemented as many other cities have.

The heartening thing about the document is how seriously the CCC is considering the requirements needed to reduce the carbon intensity of transport in the city. In many ways there are more concrete proposals developing than in Auckland's Transport Emissions Reduction Plan discussed previously - Emission Reduction in NZ.

Highlights are the discussions of Low Traffic Neighbourhoods with references to relevant recent projects in the UK. This is perhaps the action that excites me the most as it has a direct impact on where we live. The plan even leads with the need for Safe and Liveable Streets.

The other is the need to keep developing the Cycle Network - I'm a proponent of adding in more interconnections between the Major Cycleways which are spokes in the wheel... and at present do not form a network. I'll post more on my thoughts in a future post.

I especially like the focus on the hierarchy of how we want our streets to be used. 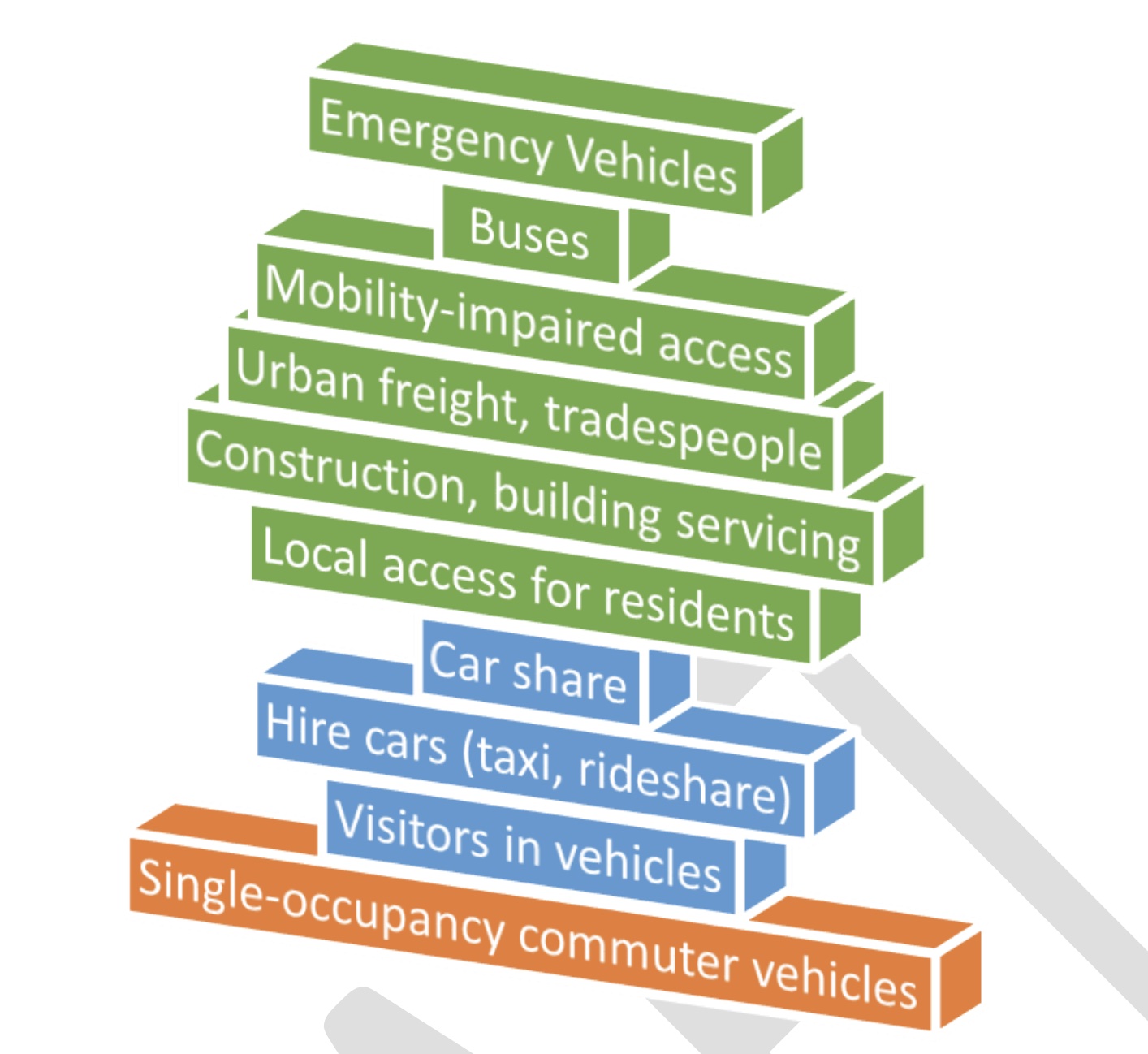 This is a fantastic way to understand why we need to design our streets and thoroughfares the way we do. That's because any naysayers can be asked how they would re-prioritise the hierarchy and can then be called out when their positions are shown to conflict with what even they agree with. It's really not controversial to put Single-Occupancy-Commuter-Vehicles at the bottom of the list... and to then put in place the transport system that allows the hierarchy to work.

The ultimate irony is of course that getting more people out of cars will allow those who want, need, and will pay for using their cars will have a much better outcome. More Public Transport, more paid car parks, more cyclists, will make it easier to drive into the CBD and park up. It's just not controversial at all.

But in a way the two curmudgeons are right - it's good to have this out where the electorate can see what's being considered. It will only work in the way they intend if a whole lot of old curmudgeonly voters turn out for them instead of the future of our city... those who will live with the consequences of their elders foolish concerns.

We need more people to vote in local body elections.
Copyright 2022. All Right Reserved.
By Hab3